Making fake pee â€“ technically called synthetic urine - is extremely difficult to do, unless you rely upon the existing premixed synthetic and other urine products that are out there made for this purpose.

Normal urine composition contains a number of chemicals, these include the following:

You have several options for production of synthetic urine.

The usual and more straight-forward option, is to use concentrated synthetic urine or to find a premixed urine or powdered urine. The second and very difficult option is to actually manufacture fake pee yourself. 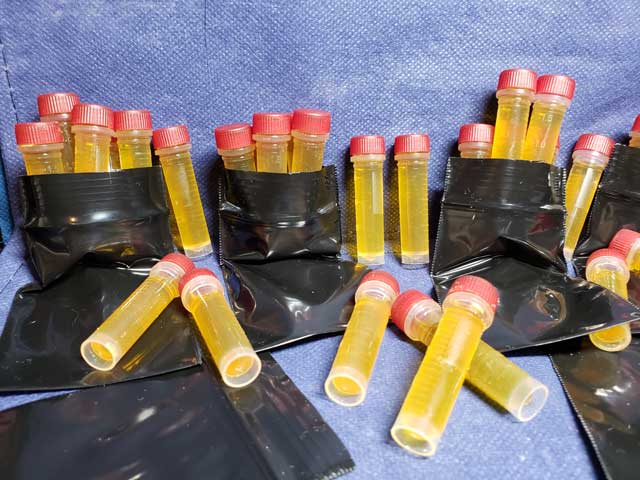 
Below is a video transcript from the above:

The other one is the pre mixed urine. If you start looking at urines and you want to find out whatâ€™s good and whatâ€™s bad itâ€™s very confusing because thereâ€™s so much misinformation; that every company is touting that theirs is the best.

Look at the history.

Just look how long they have they have a history of. This company that makes the (powdered) synthetic urine has only been on the market for four or five years I think, so itâ€™s not really long enough to really get a track record.

But if you go through and start looking at all of the different products, that youâ€™re going to see here, start looking for updates.

Have they had to change the formula?

If some of them have had four, five and six different variations of formula, which doesnâ€™t make a lot of sense. If it says on the box â€˜contains uric acidâ€™ â€˜contains ureaâ€™ it should have contained that to start with. Thereâ€™s no reason why companies should have to go in later and add it. Innovative Researchâ€™s synthetic urine contained Uric acid and urea from the very beginning twenty-one years ago. It also contains a lot of other things that a lot of other synthetics do not carry.

There are labs that are out there that go way beyond what the standard testing protocol is. They go out on their own and try to figure out how figure out if somethingâ€™s synthetic .
Some labs even go as far as to smell it. If a lab goes as far as to smell urine, since there isnâ€™t a machine that does it and its just a human that has  to smell the urine, that lab and is breaking all protocols and is not being very scientific. Even though a lab should be specifically scientific; thatâ€™s all they should do. But theyâ€™re not; you have to watch out for labs.
Thereâ€™s stuff that Innovative Research has put into their urine that is in no one elseâ€™s urine that Iâ€™m aware of and that has kept us from ever having to do updates.  If you start looking at other ones, I canâ€™t speak for them, I do know they seem to have a lot of updates.


Look at their history.


When you look at their history that basically will tell you the truth and where to go. If you plan on trying to make Synthetic urine I would suggest that you go into it as a business. Because you will spend so much money buying the lab equipment , getting everything prepared, you might as well just go into try to make your own one and sell it, because itâ€™s that expensive.

And as far as the premixed goes, you have again to watch for the updates.

If you plan on making your own urine

Expect  to do a lot of research, do a lot of homework, buy a lot of equipment and it will be trial and error for a long time before you probably get it right. Thatâ€™s all I have to say, I would suggest against making your own, and buying it from a quality source.

Is making synthetic urine possible for the layperson?

In summary, in order to produce fake pee, or synthetic urine yourself, you would need not only to add uric acid, but also other ingredients that are often difficult to reproduce and which are tested in the lab. In fact, weâ€™d go as far as to say that youâ€™ll need your own lab and the level of testing and expense youâ€™ll require to do the job properly means that you may as well start producing the urine to sell were you to go down this route.

In the production of these pages, we have consulted various sources. These include: